An MA (Graphic Arts) from Saint Martin’s School of Art in London, David Gerstein is an Israeli painter and sculptor. He began as a figurative painter and illustrator of children books and was recipient of the Israel Museum Prize for illustration. Gerstein’s first exhibition in Israel was held in 1971 at the Engel Gallery in Jerusalem, comprising figurative drawings and watercolors. Thereafter, he exhibited at Jerusalem’s Artist’s House in 1972 with large oil paintings dealing with interiors and the seaside, work that received enthusiastic reviews. Gerstein’s post-pop art style is characterized by bold colored, multilayered cutout steel. His outdoor sculpture “Momentum” is Singapore’s tallest public sculpture.

Gerstein sought to make statements about the world and life, inter and intra-relationships and interactions with the environment, and less about statements concerning the language of art, per se. In the 1970s, Gerstein explored the integration of personal statement with figurative painting, particularly in his watercolors and gouache on paper. At first, these works were intended as sketches for large canvas oil paintings. With time, though, he found interest in working in watercolors on paper, only, and they became his main medium.

In the space of Sculpture, Gerstein’s aim to portray the daily experience of Israeli life came to fruition in the 1980s. Gerstein figuratively describes chapters from the Israeli experience, derived, among others, from childhood memories in Tel Aviv. 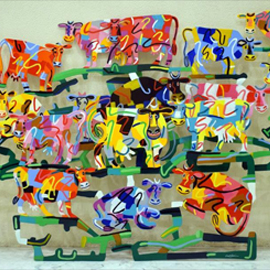 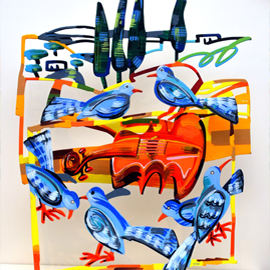 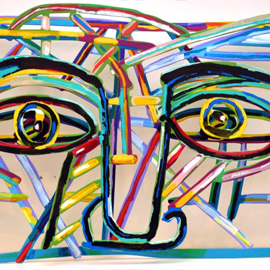