Varun Bahl launched his eponymous label in 2001. He showcased his Spring/Summer 2004 collection at White in Italy to both international acclaim and commercial success. Later, he was chosen by the Camera Nazionale della Moda Italiana to showcase his SS ’07 and AW ’07-’08 collections at Milan Fashion Week, making him one of the first Indian designer ever to participate on the calendar.

Varun’s work marries the beauty of heritage Indian handcrafted embroideries with a modern colour sensibility. His clothes range from traditional saris and lehenga ensembles to contemporary separates like trousers, tunics, jackets, and dresses. He is known for the lightness of his fabrics and not overloading them with heavy embellishments. He has been dubbed the couturier of flowers because of his love for floral motifs that he explores in each of his collections—whether couture or ready-to-wear—via embroideries, weaves, and prints.

The designer derives inspiration from the Art Nouveau period and blends that with his innovative design aesthetics to create a series of vintage floral stories. Through his designs, the couturier aims to enhance the feminine beauty of the modern woman who revisits the tradition for the combination of classic & contemporary styles with exemplary craftsmanship. The designer has always played around the lines for romanticism and has included elements of Victoriana which can be seen in his designs as he incorporates in luxe fabrics, Victorian textures and extravagant embroideries. Regency classicism has been one of the important aspects as from that the forms and motifs have been derived keeping in mind the ancient Greece and Rome. 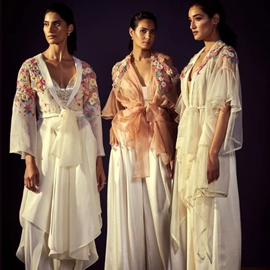 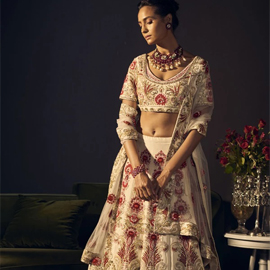 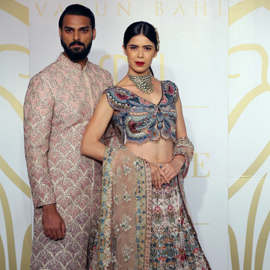