FROM MEN TO WOMEN: THREE ICONIC FASHIONS THAT BELONGED TO MEN

1st September marks the 300th death anniversary of the King of Couture, King Louis XIV, the longest-reigning French monarch. He is known to have imported his fashionable wardrobe from Spain in the 15th century when the fashion capital of the world was Madrid. He was instrumental in making Paris the fashion capital. Interestingly he put a ban on importing anything that could be made in France, including cloth. This gave an immense stimulus to the economy thus slowly converting it to the ‘Mecca of Couture’.

Though the history of fashion mainly muses on women’s fashion, men have played a predominant role in rolling the dice. The early 17th century, saw a rebellious change in women’s fashion including cutting their hair short, adding epaulets to their outfit inspired by the military and adopting the heels to name a few. 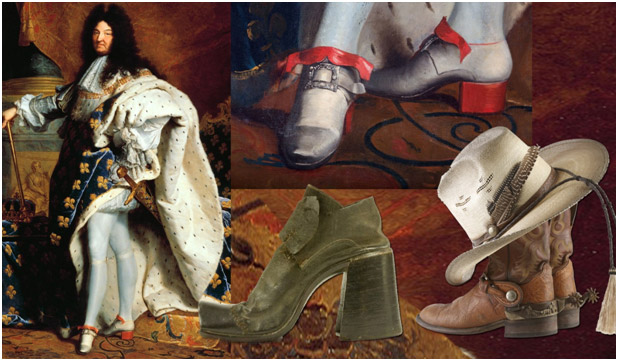 The high heels have made women stand tall fashionably for decades. It’s her one weapon to declare her command over being ‘less fortunate’. However, it is fascinating to note that high heels were initially worn by men as a form of riding footwear. In the 9th century, Persian horseman was particularly known to be wearing heels that help them to stand up in their start-ups and secure a good stance, which allowed them to effectively use the bow and arrow. By the end of the 16th century, horsemen traveling from Persia to Western Europe introduced it to the lower rung of the army. As a response to it from the aristocracy, men started wearing higher heels. Thus, was born high-heeled shoes for fashionable men in Europe. Flamboyant and impractical styles have always been associated with the upper-class fashion. The high heels were a quick adaptation as the fortunate men never had to work in the fields nor had to walk far on the streets like a common man. King Louis IXV of France was a 5’4″ man and known to be a shoe collector. His collection had a number of high heels, which he flaunted and used to walk tall among the common people in the court. The French heels and soles had a red dye, which was quite expensive. He went on to inspire Charles II of England who wore red painted high French heels during his coronation in 1661.

In the 1630s, women started smoking pipes, wearing hats, including adopting the heel in order to look masculine. So what is considered to be sexy and feminine, the ‘high heels’ were actually a symbol of power and hierarchy before the 17th century. Heels were no longer worn by men until 1960s, in form of low heeled cow-boy boots and platform shoes worn by the dandies in 1970s. 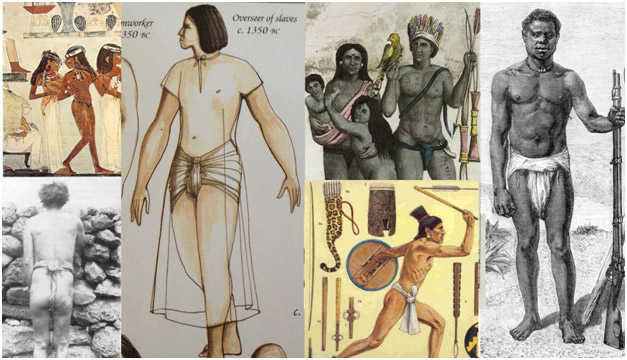 This particular inner-wear has always been associated with the sexy women and more particularly the prom stars. History claims that the G-string was adopted by men and known as the loin cloth. It was a piece of fabric held in position by a string, which would cover the groins of men. From the word ‘groin’, it got its present name of ‘G-string’.

Though the first G-string was seen in the 1920s for women, it originated from the thong, underwear worn by men in ancient Greek and Rome. It simply consisted of a strip of cloth passing between the legs. There was another triangular form of the same, with string or loops to fasten the triangle between the legs. These were found in several numbers, made out of linen, in the tomb of Egyptian king Tutankhamun. In the Middle Ages, men opted for the loose fitting ‘braises’ as a lower undergarment and gave up on the thong. 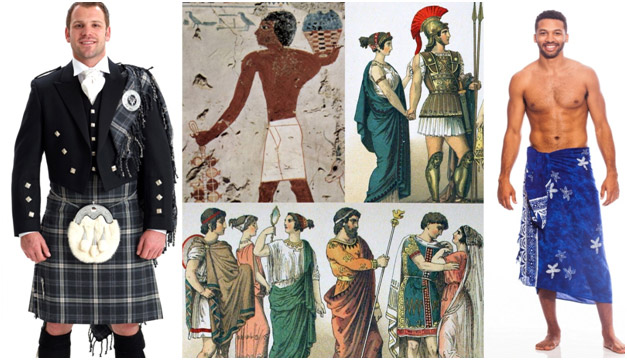 The skirt was worn by Egyptians, Greeks and Romans men, mainly due to the freedom of movement it allowed. It was worn by all men, except horsemen. Men were found in skirts until the early 14th century. The evolution of tailoring in the 14th century gave birth to the bifurcated garment that gradually got associated with men’s wardrobe. In many countries including Scotland and Indonesia, the traditional costume of a man has been a skirt. The Scottish still wear the kilts- the pleated skirt in Tartan checks and the sarong is also worn by Indonesian men. In India, the ‘lungi’ is worn by many including the Muslim men looks like a wrap skirt.

It is astounding to find how these styles that came into women’s wear from men’s wear, gradually become a taboo for men in most societies.