Revolt to Ramp & Retail: The Story of India’s Blue Gold

100 years ago on 15 April 1917, the official revolt against the forceful Indigo Cultivation was spear-headed by Gandhiji at Champaran, in Bihar. There, he initiated his first Satyagraha and the rest is history. What perhaps went untold was that the Blue Revolt was initiated earlier in Bengal where the cultivation started in 1777.In 1859, Dinabandhu Mitra’s revolutionary play ‘Nil Darpan’ calls Indigo as the ‘Yama’. Indigo, as the misnomer goes was planted by the British. Its use in India actually dates back to hundreds of years before the British Raj. It was the only naturally available source of blue dye. The reference of the ‘Blue Gold’ is found in the excavations of Mohenjo-Daro as blue clay toys and bluish cloth remains.

Some of us have even grown up listening to the Jataka tale of the ‘Blue Fox’ who fell into the vat and acquired a blue colour. Upon minute speculation of the tale, it shows how an ‘Indigo dyed fox’ stood out among the rest in the forest and the color instantly demanded attention and hierarchy. It was this aesthetic appeal that compelled the British to trade Indigo from India to exchange it for exotic spices from other Asian countries. The intention behind this forceful cultivation of Indigo was the price it fetched; equal to that of 1 kg of pearl in the 16th Century.

While the plant provided excruciating agony to Indian farmers, the colour ‘Indigo’ is the strongest painkiller in the color spectrum.Three types of Indigo plant were found in India. Since Bengal Indigo was the most superior, it is surprising that the entire Indigo trade eventually shifted to the western part of the country. One potential cause is the abundance of the plant Indigofera tinctoria, and neervel, in Kutch. The other could be the remembrance of the revolt that Bengal initiated against growing Indigo. 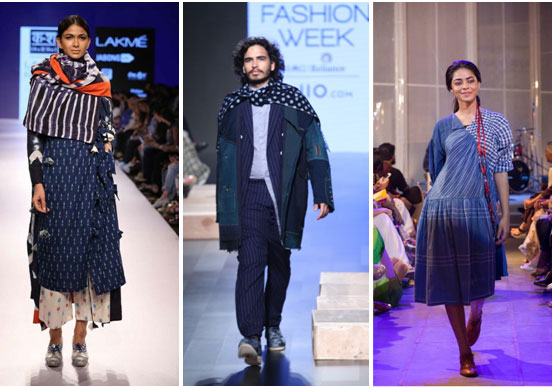 This year the nation is celebrating the Champaran Centenary. With a conscious shift towards sustainability, chemical dying factories must clean up their act. An inclination towards Indigo is a clear outcome. From handcrafted ceramics to clothes, bags, and shoes – Indigo is everywhere. Indigo repels insects and the shade compliments all skin tones. It has made a noticeable presence in fashion weeks across India. LFW showcased a strong inclination towards Indigo for last few seasons. It was evident in collections of Rahul Mishra and Priyadarshini Rao. Karishma Sahani (Ka-Sha) showcased her layered collection in 2015. Indigo dominated the collection for Anita Dongre’s LFW Resort 2016. LFW 2017 showed a prominent influence of Indigo in the collections of Rajesh Pratap Singh, Abraham & Thakore, Chaman Siju and Eleven-Eleven. The India Story witnessed a strong blue vive with active participation from Naushad Ali, Antar Agni, Amalraj, Translate and Aavaran along with quirky startups like Ulta Pulta, Adhwesh, Gaaba, and Dheeraj, for both the seasons. 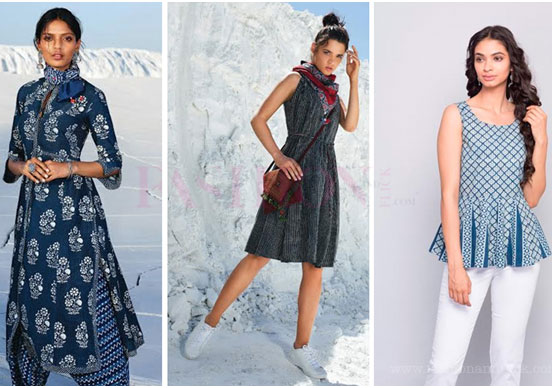 The Indigo Collection by Fabindia

The passion for blue tricked down from the niche handcrafted to the retail brands owing to its demand. Fabindia has dedicated a chic line to Indigo, comprising of both Indian and fusion wear – kurtas, tunics, skirts, tops, palazzos, dresses, sarees, dupattas, shirts and kurtas for men and an fascinating kid’s collection. Biba has an exclusive Indigo range developed by Rohit Bal. Pantaloons and Westside are celebrating Indigo with equal enthusiasm. Sonica Kapur launched her Indigo Collection for online brand Jaypore. Other e-commerce brands like AJIO, iTokri, Tjori also have exclusive Indigo collections. Here comes a word of caution from Dr Padmini Tolat Balaram, an avid researcher on Indigo. She explains that most dyers sell ‘Alizarin’, a chemical dye in the name of natural Indigo in the mass market. 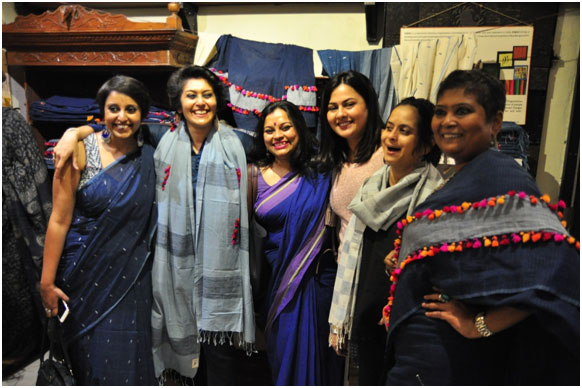 For Bappaditya Biswas, Indigo stands for both “revolution and love”. The brand, Bylooms launched the Bailou Indigo Company this year, adding a blue corner to their aesthetically done Kolkata store on Valentine’s Day. The collection has cotton saris starting from Rs. 3,500, and cotton scarves starting from Rs.850. It will soon expand to include bags and home furnishing. Bappaditya explains, “Indigo is very close to my heart. It is difficult to fathom the incredible impact of Indigo on the many civilizations and its continued presence in folklore, art and its iconic status as the dye that makes blue jeans blue.” Catherine Le Grand rightly said that Indigo is “The colour that changed the world”.