While, fashion for most is to remain trendy and show off the latest from the couture collections or the prêt lines, thankfully for some it is the most visual form of self-expression. Holding the hands of those, who wish not to remain subscribers to the dictates of the trends, fashion has, over centuries defied the rules. While each trend that got popular every season, set the previous year’s order into decay, some styles evolved- irrespective of the grid. These styles were notorious for being comfortable for a handful yet brands took the leap to generate them. Some of the niche “beyond the rules” fashion of all times, which are trending this season, are as follows:

To Hell with Gender: Androgyny & Unisex

While women over centuries have challenged the gender rules in fashion, men have been less daring. It began with the adoption of the bifurcated clothing by women – the ‘pants’ and went ahead to the chopping of the locks to achieve the ‘Flapper Girl’ look in the 1920s. Then the shoulder pads for women’s pant suits arrived in the 80s. For men, the defiance was prominent until Austin Power flaunted floral prints and Elvis Presley got some ‘bling’.

Industrialization is believed to be the father of the gender divide. The sartorial segregation between who wears what – was a natural following of their role in the society. With the blurring of roles in the recent times, perhaps it’s time for clothes to disregard the divide. Thus in Thom Browne S/S- 2018 collection, his male models flaunted their pleated skirts paired with jackets in Paris. A few celebrities, who swing their skirts with envious swagare are Vin Diesel, Kanye West, and Jaden Smith, including our Ranveer Singh. Designers like Marc Jacob and Jean Paul Gautier are offering them some great options. Back home in 2003, Rohit Bal made his men wear embellished full-length skirts.

Following this, some brands took the gender blender into the next level by introducing unisex clothes. Same styles and sizing in these suddenly speak of the liberty taken. Brands to watch out include Rad Hourani, Boy London and 69. Ujjwal Dubey’s unusually draped tunics can be worn by men and women both. Vivienne Westwood’s A/W 2104 women’s wear collection had unisex elements. In 2015, Selfridges extended the unisex styles to its patrons, thus encouraging the mass to support gender neutrality. 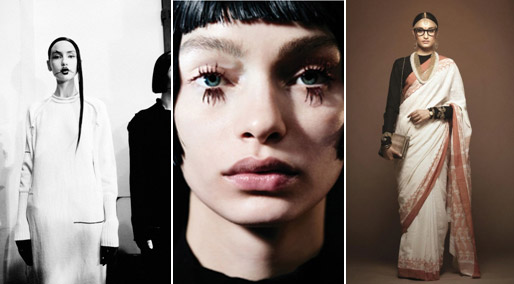 Fashion is challenging the clichéd definition of beauty and glam. Yamamoto and Kawakubo are churning out designer pieces that are not only adopting the de-glam style but highlighting imperfections of the body. This style goes close in hand with the mindset of the urban chic woman who does not believe in attracting the men with skin deep beauty. With confidence level rising, the new woman would want anything but just look pretty in romantic, glamorous layers of clothes. Equaling their newfound belief, designers are not only looking at adopting slow traditional process but also moving towards organic handmade clothes that are environment-friendly and in keeping with the De-glam mantra. The use of cotton khadi for Indian bridal wear by Sabyasachi Mukherjee is a bold step towards offering young brides a piece of the heritage minus the usual bling. Designers in the country and abroad are adopting handloom to create chic clothes that are miles away from being glamorous but definitely high on style quotient. The anti-beauty look in makeup is also catching up with numerous makeup artists featuring it in pages of fashion magazines.

Anti-fit: Freedom from Size at last! 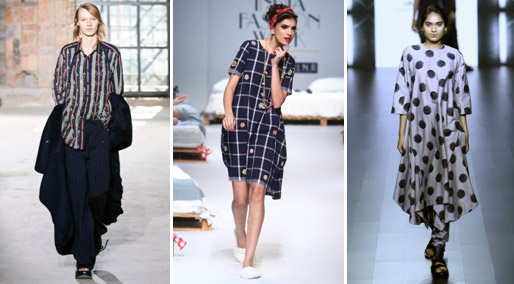 With the temperatures rising and scales reading high, most fashion enthusiasts are ditching the shape revealing ensembles. This defiance from flaunting the shapes and body-con lies in adopting the oversized and anti-fit clothes. While the world is dominated by silhouettes, this otherwise ‘man-repealing’ style is a sure way to look stylish at the expense of comfort. Modern lifestyle is leaving less room to remain slim or uncomfortable. Thus numerous women are choosing to remain stylish under oversize clothes while dumping the ‘size-zero’ fixation. An increasing number of designers are paying no heed to the sacred contours like Yamamoto and Sies Marjan. The Indian catwalks also witnessed shapeless clothes by Kallol Dutta, Pallavi Singh, Ujjwal Dubey, Chola, Maku, Pero, Ashima Leena etc.